The good:  Mom’s still in Columbia.

The bad:  She hates me, Columbia and anything related to Missouri.

And why not?  She’s been uprooted from a home she loves and planted in a strange place with barely any personal belongings.  And even though this was planned and agreed on “for a few months,” in her mind she’s kidnapped/trapped/imprisoned and demands to go home.

The whole scenario could have been much better if I had had some siblings who were on board.  Mom’s move could have been completed in one step.  Instead, she is in “visitor” status and hell bent on returning to “Chicago,” even if she has to walk.  On Friday, her furniture arrives and friends Susan and Bonnie will assist in bringing “home” to her.

This isn’t going to go well.

During these first two weeks, we’ve been postponing the realization that Columbia is now Mom’s new home.  We can’t return to Grayslake because the front stoop is not fixed and I have a dental appointment on the 20th.  The narrative will need to change to “this is your new home.”

While in the assisted living area, Mom has participated in all the activities, eaten well and has made a new best friend, Esther.

She enjoyed having her hair done.  Below, having lunch with friend, Esther. 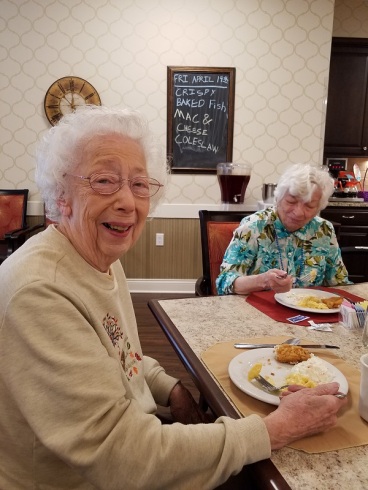 Esther has enjoyed visits with my dog, Cinnamon: 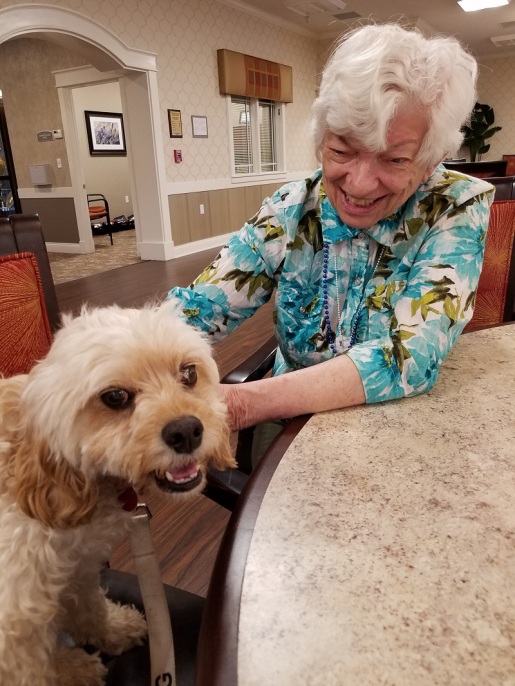 When not engaged, Mom is obsessively thinking about how to return to Illinois…train, bus, taxi. She talks about it frequently in person and on the phone.  “When am I going home?”  “Are you taking me home today?”  “Can you take me to the train station?”  “Maybe I can get a bus.”  “I’ll go if I have to walk.”

I was hoping the assisted living residence would be a good fit.  Eric, the administrator, hoped for the same.  However, Mom routinely has difficulty in the late afternoon and evening hours.  She gets agitated and focused on going home.  When angry, she sometimes yells and threatens to leave.  When on the phone with me she talks about not having anything to live for, wanting to be dead and sometimes tells me to go to hell before she hangs up.

Of note:  Mom’s outbursts of wanting to die and her telling someone to go to hell when she is angry is long standing…decades long.  She has always been easy to anger and lash out.  Fortunately, she calms down after a while and often tells people, “I have a temper.”  Yep.

Mom’s behavior has been a bit disturbing to other residents…most of whom do not have dementia or if they do, it is mild.  Some have spoken with Eric with concern for Mom.

Last Friday I met with Eric and two directors of nursing, and we agreed that Mom would be better served in the memory care building next door to the assisted living building.  In memory care, she will be more secure at night and will have more individualized assistance for times when she is agitated.

The plan is to have her continue to enjoy activities next door in assisted living and time with her friend, Esther.  She and I can go out and do things in the community.  Safety and security at night are the main issues.

Mom will be introduced to her new room tonight.  I’m expecting the worst.

There are no one-bedroom apartments in the memory care building.  Because this is a new facility and their population is low, Mom will have a double room to herself.  That will give her more space.

A room has been selected and yesterday I brought over some additional clothes and some decorations from home.  Staff helped get things set up and furniture will arrive Friday.  Mom will be over at the assisted living building while her furniture is moved in, and friends and I fill her dresser with her things and spruce up her room.

The logistics of it all and my assumption of Mom’s reaction are what has me up in the middle of the night writing this blog entry.  I woke up driven with the idea that I must plan what furniture goes where in her new room.  I have a draft and will share it with friends for their input.

Meanwhile, we have to get through the day and the eventual introduction of Mom to her new room.  But first we will party.

Today is friend Susan’s birthday.  Eight or so of us gal pals will meet at Houlihan’s around five for a happy hour celebration…drinks and appetizers.  Yesterday, while visiting with Mom and Esther over coffee, I mentioned the birthday celebration for Susan.

With that decided, I informed Eric and he checked with Esther’s niece, Robin, for permission.  Robin and I spoke on the phone, shared stories, and are both fine with having Mom and Esther join my gal pals at Houlihan’s.  I know what to order for Esther and Mom will probably enjoy a sandwich or dinner item.  Susan and I will pick up Mom and Esther and bring them back later.

While we are out, the staff will move Mom’s clothing and other minimal items she has for now over to her room in the memory care unit.  When I bring Mom and Esther back, we will go into the memory care building and be greeted by staff who will explain Mom’s new arrangement to her.

Then we expect some difficult days/weeks ahead as Mom adjusts.  We hope that when her furniture and favorite things arrive on Friday, things will get better.

I am grateful for the support of family, friends, pals, folks on the Agingcare.com forums and the staff at Mill Creek Village.

That said, I lively daily with regrets and fears for Mom’s well-being.  This is pretty typical with family situations such as ours, and I will need to learn how to keep the demons of regret and fear on the far back burner.

It’s just so damn sad.  Dementia is such an insidious disease, especially for someone like my Mom who is extremely independent, never wants anyone’s help, and is prone to mood swings.

I know that when we visited Dad when he was in skilled nursing with advanced dementia, her greatest fear was “ending up like that.”  And now, six months into widowhood, she is being relocated and is royally pissed.  I get it.  I would be, too.  I just wish she had the ability to reason and understand the necessity and benefits of living in the same community.  She doesn’t…and never will.

One of my fears is that my mother will die hating me.  That is likely to be the case.  Sure, there could be a miracle and she might one day say how nice it is to be in Columbia…but she’s a clever gal who enjoys holding on to grudges.  I will always be the bad guy…but I know she cannot live alone safely, so here we are.  She is safe and angry.  I am experiencing weird sleep patterns for a while, but relieved she is in Columbia.

This blog was originally titled "Drifting Toward Planet Elderly," and it shared a journey I had with my elderly parents as they both finished their lives battling the complexities of dementia. After both passed on, I changed the title to "Living on Planet Elderly." I am a retiree who is reluctantly adjusting to the reality that she is now elderly. In July of 2021, I relocated to Middleton WI after living in Columbia MO for over 40 years. I'll go back and visit friends and family in Columbia, and I hope they will visit me. I decided that I want to experience a new and vibrant location in a cooler climate with lakes...a bucket list item of mine. I have a first cousin who lives in Madison. We have nice childhood memories, and it will be wonderful to spend some time together as elders. A new chapter begins. It's my last chapter.
View all posts by jjmummert →
This entry was posted in Parental Journal, Uncategorized and tagged dementia, memory care, Mill Creek Village, relocating elderly parents. Bookmark the permalink.