A couple days after Dad’s memorial service, Mom and I headed to Columbia, Missouri where I’ve lived for almost 40 years.  The purpose of the trip was for Mom to meet great grandchildren, spend time with some of my friends, and relax a bit.  We went with the understanding that we would be gone about 9 days and I put Mom’s mail on hold so she wouldn’t worry about it.

The day after we arrived, Mom woke up and asked if I would be taking her home.  She asked me that every morning, and every morning I explained that we would be in Columbia about a week.

It was awkward having her visit me.  She liked my little rental house, the front porch, back deck and the large backyard, but she had nothing to do and I think it is now quite difficult for her to sit and read anything like a novel or magazine.  Mom is not one who enjoys having nothing to do, so I found things for her to do and she was thrilled.  Often it was meal prep or after meal clean up.  We do dishes well together and she tried her best to find things and put things back where they belonged.

What she really enjoyed was sweeping the back deck.  Acorns and leaves were starting to rain down big time, so I gave her a broom and off she went.  At home she loves to vacuum, so this was similar.  She did a great job. 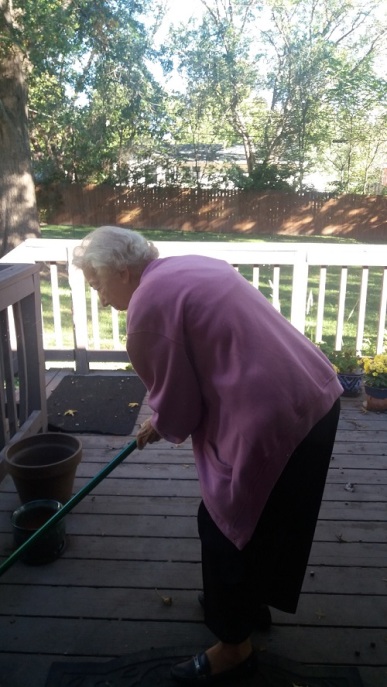 We had a nice luncheon with a bunch of pals, hosted by friend Bonnie.  We also invited a couple of my friends over for a blueberry pancakes breakfast, and we enjoyed coffee and a delicious apple dessert at another friend’s home.  Mom was delighted to meet my friends and often commented on how lucky I was to have so many friends.  I not only feel lucky, I feel blessed.

In addition to friends, I arranged for Mom to spend a little time with her great grandchildren.  It was sweet to see her enjoy their company, but also sad in knowing that for so many years she could have been a part of their lives if Mom and Dad had moved down to Columbia.  But they never did. 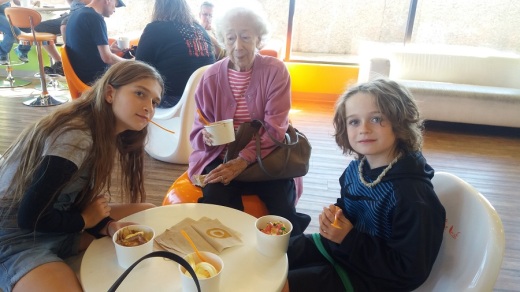 And of course…my cat, Winston, took to Mom immediately.  He’s usually shy and hides from visitors.  And she…SHE WHO NEVER LET ME HAVE ANY PET WHATSOEVER WHEN I WAS GROWING UP…she adored Winston.  They became best buds…and I was delighted. 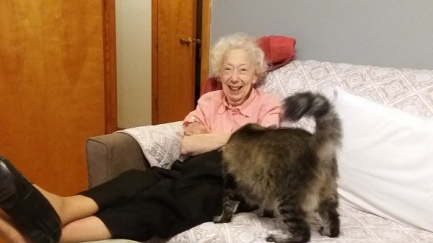 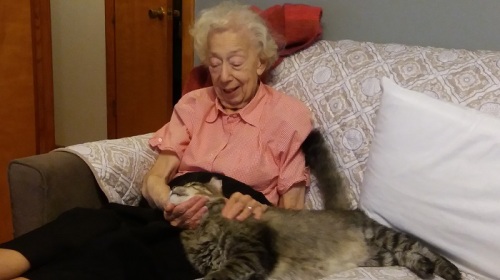 I came to understand that Mom’s desire to be home was also a desire to be closer to Dad. It was as simple as that, so after all the planned activities were finished, I took her back to Illinois a few days early and she was thrilled to be home.  I stayed a few more days and then returned to Columbia on a Saturday.  On Sunday I helped my landlord clear up fallen branches from old trees, and by the end of the day on Monday I was in my doctor’s office with a diagnosis of flu and bronchitis.  Oh, hell.  Why not?

My Encounter with the Flu

I meant to get a flu shot in early October, I really did.  I could have gotten it at the Walgreens in Grayslake, but did I?  No.  For some reason I wanted to wait until I got back to Columbia.  I was planning to get the flu shot the day the flu welcomed me with open arms.  Now that I’ve recovered and gotten my flu shot, I can say, “Oh, well.”  But at the time it hit, all I wanted to do was crawl in a hole, go to sleep and never wake up.

It was the first time the flu had taken me down so completely.  I had it once before when I thought it was just bronchitis but then tested positive.  This time, all I can remember is the overwhelming lethargy and loss of appetite…the constant chills…the inability to get my mind to shut up when I tried to sleep.

I remember lying in bed and thinking, “Now I know why sometimes old people are just so tired of being sick, they just want to die.”  Then I remembered something important:  I am old.  Next March I turn 70 and that officially labels me as elderly in many facets of society.

Lying in bed I had too much time to think and no desire to do anything else other than drink lots of cold water and pee a lot.  Could not read, could not enjoy TV or Netflix movies…could not eat or sleep well…just generally miserable and also quite sad.

I think the year and a half of frequent trips to Illinois, trying to manage my folks’ care from long distance, and watching Mom’s short-term memory deteriorate while Dad’s end stage dementia moved him to give up on eating and drinking anything and then die looking like a shell of the man he once was…it all came to a head and I got sick…first with the flu and then with a rather deep bout of depression.

And then Donald Trump wins the presidential election.  !!!!!!!

Time has moved on. I’m over the flu but miss my Dad very much.  Mom is living independently at home for now with assistance from neighbor Kevin when needed…and even when she thinks it’s not needed.  She calls me frequently with the same confused thoughts and misconceptions about bills and banking.  At least she can still ask questions and hold a conversation.  She might not remember it the next day, but she can call again and I’ll explain it again…and again…and again.   Should she need more assistance, my hope is that she be able to remain in her home as long as possible…even if it means professional assistance later.  She does not want to move to Columbia and I will not uproot my life and move to Illinois.  I am able to be my mom’s manager and she appreciates that, but as the only child, the role of primary caretaker is impossible for me…and she has often said she does not want to put me through that.

So we move along day by day…phone call by phone call…until our next visit.  I know Mom is comfortable and relatively safe under Kevin’s watch…but I also know she is lonely and unhappy.  “I’m so tired all the time,” she tells me.  “I understand,” I tell her.

Retiree who is reluctantly adjusting to the reality that she is elderly. Resides in Columbia, Missouri.
View all posts by jjmummert →
This entry was posted in Parental Journal, Uncategorized and tagged Columbia, dementia, flu, Missouri, planet elderly. Bookmark the permalink.