What can I say?  The gal’s got guts.  After seven failed attempts previous to this visit, I took her to the motor vehicle place today thinking this would do it; this would convince her to voluntarily give up driving after she fails one more time.  She passed.  The tester said it was “almost a fail…but really, she just made little mistakes so it’s a pass.”  Mom was beaming.  I was not.

“Yeah, the lady testers are much nicer than the men,” Mom said.

Not only did she pass, she passed using her reading glasses.  Jeez.

So…plans are revised.  Mom can legally drive for another year.  As before she will do so only in nice weather and her destinations are minimal.  She has not had an accident in recent years other than losing side view mirrors as she attempts to pull the car out of the garage, and to her, those incidents do not count as accidents.  Right.

When I told Kevin he said, “What are we gonna we do?”

“We step back,” I said.  “She still makes her own decisions and the State of Illinois has given her permission to drive. So be it.  We stay on the sidelines for support and/or rescue.  She’s doing this her way and I have no legal authority yet to stop her.”

However…if she should have an accident or run into problems with getting lost…then we’ll need to disable the car.  Kevin can assist with that.

Alas…the driving saga continues.  Who would have thought????

Overall, Mom enjoyed her 90th birthday on August 16.  Mom shares a birthday with Dad’s former roommate, Raymond, so Raymond’s daughter, Judy, made some lemon pies for both and we celebrated in the lobby area of where Dad and Raymond live at Victory Lakes.  Dad was too agitated to join us, but Raymond’s wife, Betty, Sister Margo and another retired nun whose name I can’t remember (sorry)…joined us.   Judy’s lemon pie is delicious.

After visiting Dad, I took Mom to see the Meryl Streep film “Florence Foster Jenkins.”  We enjoyed it.  I thought it was well done, very amusing, and quite tender.

Following the movie Mom insisted on buying dinner, so we went to Chili’s and she had a steak.  I enjoyed some pasta/chicken/Alfredo sauce dish…a bit rich, but enjoyed the other half for lunch today.

Dad was quite agitated during our two visits yesterday.  He gives orders…tries to figure some things out…and struggles so much to say what he means.  It makes Mom cry to see him say sentences like, “We got the flub dub tub trub…uh….oh….I don’t know…how to zip…zap…zippy….”  I’m coaching her on his changes and I think she pretty much understands that he’s just not able to say what he wants to say much of the time.

We took a selfie at the end of our second visit with Dad on Mom’s birthday. 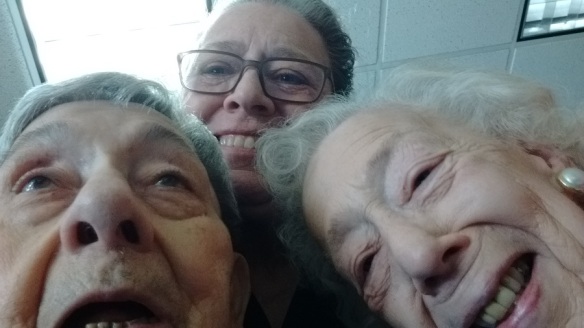 Retiree who is reluctantly adjusting to the reality that she is elderly. Resides in Columbia, Missouri.
View all posts by jjmummert →
This entry was posted in Parental Journal, Uncategorized and tagged 90th birthday, aging, Alzheimer's, Chili's, dementia, elderly driving, elderly parents, Florence Foster Jenkins, planet elderly. Bookmark the permalink.