Parental Journal 67 from Planet Elderly – Driving Test: One Attempt Down, Two to Go

Mom failed the driving test today.  (Yea!)   She plans to return tomorrow to retake it. (Groan)

We visited Dad in the morning and had an 11:30 a.m. appointment to pick up her new driving glasses plus get the required vision form filled out.  Then Kevin took Mom out for some practice time.

I don’t get in the passenger seat with her – ever.  Kevin can be more neutral.  He’s sort of the good cop to my bad cop when it comes to monitoring and assisting Mom.

She drove the opposite way and exited the strip mall vicinity. Off she went on Peterson Avenue. She was confused, and I’m sure she was nervous.  There wasn’t much for me to do except wait for her to realize she had driven away from the testing location, turn around and find her way back.   While I scanned every car that drove in and out of the parking lot, I called Kevin and told him what was going on.  After about ten minutes, I saw Mom slowly drive back to the parking lot, get out of the car and start looking for me.

I waved so she could see me and walked over to her.  I didn’t shout or say anything except, “You drive down that lane, Mom, and then turn left to go behind the building.”  Off she went and I waited inside where it was air-conditioned.

It took a while before I saw Mom driving her car out onto Peterson Avenue to take her test.  A bit later I heard sirens…then saw an ambulance…a fire truck…then another fire truck.  I started wondering how the testers felt about putting their lives into other people’s hands several times each day.  Then I wondered if any tester was ever killed or severely injured during a driving test.  Then I told myself, “Stop it!”

Finally I saw Mom’s car returning to the parking lot.  On her way to the parking space for returning testers, she bumped into a curb.  Seemed she was a little unsure of maneuvering, plus there were several other cars coming and going.  Once parked, she and the tester talked a while. With so much talking, I assumed she failed.  She did, but had only two areas of concern.  First, by hitting the curb, it was an automatic fail.  Second, she needs to come to complete stops.  Otherwise, “You did fine, Pearl,” the tester said.

When we got home, Kevin came over to learn the results.  Good sport that he is, he said tomorrow he would take her out again for more testing practice and then to take her test.  She is eager to take it again and thinks she’ll have better luck tomorrow.

So tomorrow it is.  Attempt number two.   She’ll get three chances and if she doesn’t make it, she has to wait a year. We’re also scheduled for rain/thunderstorms tomorrow, so that may delay things.

After dinner we visited Dad.  He gave me a big smile and a loud “Hi” when I greeted him.  When he saw Mom, he looked at her and shouted, “OH MY GOD!”  Then he said, “Here’s my girl” and Mom looked like she had fallen in love all over again.  It was just what she needed. 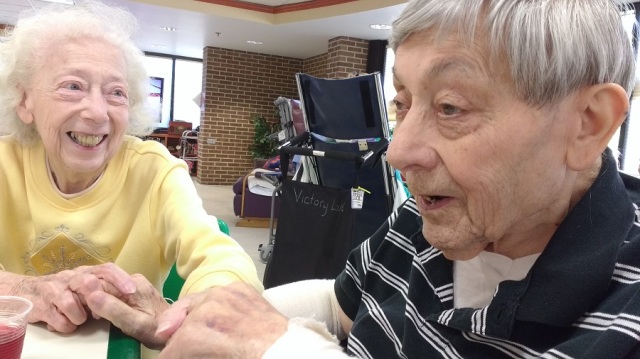 After so many days of watching him sleep, eat very little and be quite unresponsive, we hit gold.    Okay…so maybe he was in a bit of sundown syndrome time, but his eyes were open, he talked about needing to find the car and go home and then he decided he would try to get out of his chair.

That was time for us to leave and let staff take over.  I bent over to make sure he heard me and I said, “We’ll be back later, Dad,” and he said, “Okay.”

Sadly, Mom had expectations for Dad’s birthday July 1st.   He didn’t really understand what was going on and it was difficult for him to stay awake.  She had to assist him with unwrapping a shirt she bought for him.  He didn’t say anything about the shirt.  The same with birthday cards.

Some staff members came in with a gift of a handmade quilt and then we sang “Happy Birthday.”  I broke down a bit.  Could not finish the song.  Grief touched my soul for a bit and I wondered if this was the last birthday we would celebrate.

Then the Beyer family showed up with a card and a balloon.  Raymond is Dad’s former roommate.  Betty is his wife and resides in the independent living part of the Victory Lakes community.  Their daughter, Judy, assists her parents and has become a good friend to Mom and me.  With the Beyer family present, Dad opened his eyes enough for me to get a couple photos. 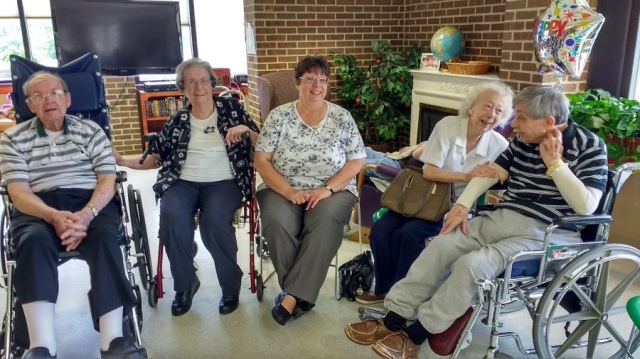 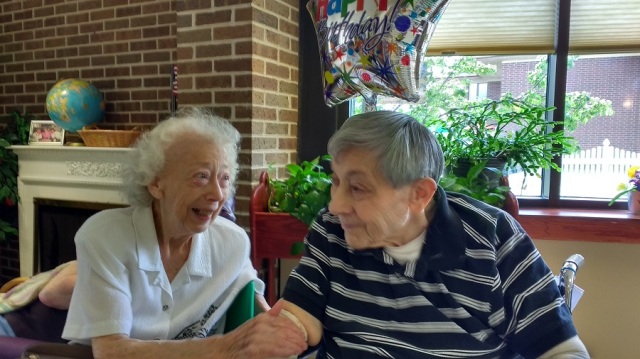 We returned in the afternoon with cake.  Dad was still quite sleepy and refused to eat a piece of cake.  Mom kind of lost it.  She thought he didn’t appreciate anything done for his birthday.  I tried to gently remind her that most likely, nothing about a birthday registered for him that day.  She was in her angry zone and claimed that he could have at least tried.  It was not a pleasant visit…but Dad was in dreamland and wasn’t concerned one bit, so we packed up leftover cake and drove home.

“This was not the kind of day I wanted it to be,” Mom said.

I kept my mouth shut.

This blog was originally titled "Drifting Toward Planet Elderly," and it shared a journey I had with my elderly parents as they both finished their lives battling the complexities of dementia. After both passed on, I changed the title to "Living on Planet Elderly." I am a retiree who is reluctantly adjusting to the reality that she is now elderly. In July of 2021, I relocated to Middleton WI after living in Columbia MO for over 40 years. I'll go back and visit friends and family in Columbia, and I hope they will visit me. I decided that I want to experience a new and vibrant location in a cooler climate with lakes...a bucket list item of mine. I have a first cousin who lives in Madison. We have nice childhood memories, and it will be wonderful to spend some time together as elders. A new chapter begins. It's my last chapter.
View all posts by jjmummert →
This entry was posted in Parental Journal, Uncategorized and tagged confusion, driving test, elderly driving, elderly parents, failed driving test, Libertyville IL, planet elderly, short-term memory loss. Bookmark the permalink.